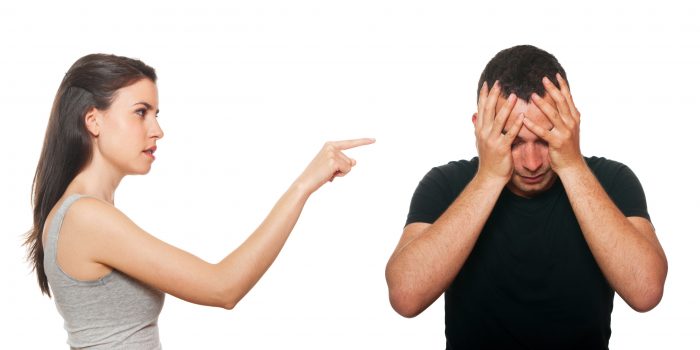 As a Psychotherapist and Relationship Coach in Private Practice, I constantly hear couples proudly tell me that they don’t fight. They genuinely believe that because they’re not fighting at all, that means that their relationship is good. And yes, that makes absolute sense to me because of the belief that fighting in a relationship is a bad thing. And while I agree with that belief, and it’s true that truly healthy couples don’t fight, it’s not quite as clear cut as most people think.

Just because you don’t fight in an obvious way in your relationship, that doesn’t mean that your relationship is good. In fact, it can actually mean the opposite of that. That’s because there’s a difference between avoiding fighting—and not fighting because you’re a healthy couple.

The couples who turn up on my couch and proudly tell me they don’t fight are typically conflict avoiders. The real reason they don’t fight is because they do anything they can to avoid dealing with issues. And believe me, this is the opposite of healthy. So just because you’re not fighting in an obvious way in your marriage (or your relationship), that definitely doesn’t mean that your relationship is good or healthy.

Just because you don’t fight, doesn’t mean that your relationship is healthy

Now as I said, I agree with the belief that healthy couples don’t fight.  My past clients are testament to this. But the reason they don’t fight isn’t because they avoid dealing with their conflict or their issues. It’s actually the very opposite of that.

Healthy couples don’t fight because they’re absolutely willing and able to deal directly with any issues that come up in their relationship. And because they’ve learned how to do that, they know how to work through any different opinion or ideas they might have without fighting. In a nutshell: they face their conflict and issues head-on and work through them, rather than going around them or avoiding them.

So if you want to become a healthy couple, then you need to be willing to risk dealing with any conflict that arises, but in a healthy way. You definitely don’t do that by avoiding conflict and avoiding fighting.

The only way out of the mud… is through the mud

That’s why I say that conflict is the secret ingredient to a healthy relationship. It’s not that you want to create conflict. Not at all. But it’s about being willing to deal directly  with conflict. And believe me those couples who tell me that they don’t fight, are typically doing everything they can to NOT deal with their conflict, rather than face it openly and directly. And that’s why they turned up on my couch in the first place.

Before we press on, let me make a quick disclaimer:

When I say conflict, I’m definitely NOT talking about abuse, violence or rage.

If you’re in a relationship where either you or your partner have become violent and thrown or damaged property, or lashed out at each other in rage, then you need to find a good couple Psychotherapist to help you work through it.  If you can’t find one, or if you want to work with me, you can do that too, no matter where you are in the world (via Skype).

But let me be perfectly clear: any type of violence and rage is not okay at any time… and no matter how small it appears, or how much you tell yourself that you, or your partner, didn’t mean it… and no matter how much you believe that it won’t haphttps://paulmcniff.com/work-with-mepen again, you need to deal with it directly and soon. Because the truth is that, statistics show us that unless you deal with the underlying issues directly, even small amounts of rage, such as throwing things, can lead to even more violence, rage, shame, break-ups and lots of regret. So if you’ve experienced that in your relationship, find some help right now. Please!

Now, back to why I believe that dealing effectively with conflict is a crucial part of any growing relationship.

But eventually, you, or they, will say or do something that the other disagrees with. This is absolutely normal. It’s natural for two people in a relationship to have different ideas, expectations, values and priorities. After all, you and your partner have both had different experiences of life and different upbringings, so this makes absolute sense…

But because of the “happily ever after” pressure in our society and the fear of breaking up, rather than saying anything that could create a fight, you might find yourself holding back to avoid conflict. And while on the surface this might appear to work, it won’t work for the long-term. Just because you and your partner might not be outwardly fighting in that moment, that won’t necessarily be how each of you feels inside.Inside there might be feelings of resentment and frustration building up. And these will grow stronger with every little thing that you or your partner feel you have to hold back about.

And believe me, holding back and avoiding conflict is one of the worst things you can do in your relationship, because it typically leads to bigger fights and arguments down the track. Because just like that saying: “the straw that broke the camel’s back”, it might work for a while, but there will come a time when that frustration will grow so much that one of you won’t be able to hold back any longer. And then BAM… it will be on–a major argument or fight.

I would not have thought about conflict this way. I really try to avoid fighting with my boyfriend so he doesn’t get angry with me and we stay happy. But I know there are things we don’t talk about and they get in the way. I always believed that if you fight a lot then you mustn’t be with the right person. Your article really makes sense to me.This has made me rethink conflict. I’m… Read more »

I enjoyed reading your article. I really didn’t think of conflict as that. I thought that if I kept how I feel inside and make sure I work on doing the things to make him happy. I realize that I can’t hold things back and let them get trapped in until it’s time for them to explode. I will look at my relationship as resolve and conquer every issue as it arises just to improve… Read more »

Hey Tanesha, thanks for your comment. Yes, it’s really important to deal with things directly, rather than letting them simmer under the surface, only to explode later on. So it’s great you’re going to focus on that. But be careful about how you do deal with things, because sometimes trying to address issues in the relationship can backfire and create even more resentment and problems. So let me know how you go. And keep an… Read more »

Okay but lately it’s been too much fighting so I am walking on eggshells, just to get through this phase :/ enough is enough, I want some peace and quite, I want him to tell me nicely what bugs him, instead it being blown up out of proportion and result in a fight.. I am definitely someone who doesn’t always says what is bugging her, in this relationship I have already learned otherwise (to tell… Read more »

Are you ready to take back your power and make your relationship great?

Enter your details below to download the first few chapters of my book for free: